A short film showing the set-up for Deborah Milner's Regenerating the Reef show, which Anatomised staged and lit for her as part of London Fashion Week in 2018.

Extract from an interview with Deborah Milner.

Wendy (Drew) was singing your praises about the wonderful quality of your cut design, and the real intelligence that appears in your designs and your fabrics. The fact that you’ve dressed her for 20 odd years, she’s clearly a huge supporter and says you’ve evolved tremendously in that period. It’s a lot to do with tailoring, but also she says it’s to do with the quality and delicacy of your approach.

DM I think that’s something that you develop over time with the skills that you learn and practice. All those years of experience, you can put those to use and produce something that’s a distillation of everything you’ve learned. I wanted to create a collection that was different, but also quite simple and showed a really modern cut — something that you’re not going to see everywhere else but also something very simple and wearable. And that’s quite hard to do. All the skills of my team came together and made that happen. It wasn’t just me; there are 20 to 30 of us.

That’s true, but you’re still the creative director, and you always direct the cut and the look. The fact is, you’ve developed your work over 20 to 30 years, and it just looks gorgeous…

DM I’m glad that shone out because you don’t know when you’re in the studio, whether people are going to get that. But I think it does show.

The reactions from people in the show were powerful, and everybody wanted to touch and be near the fabric. So that’s one of the great things about your show — the proximity. Your designs are so malleable; they’re so beautiful and so approachable.

DM I like the idea that people can touch them and go closer, especially because of the sustainability element. The embroidery is dyed with natural threads. If you lift the organza, both sides are exactly the same — incredible craftsmanship. I wanted to showcase that.

In this show you’ve employed people who’ve done the most remarkable work from all over the world.

DM Yes, we have. For example, the embroidery was done in China by a family business from the middle of nowhere. We’re trying to help keep some of those handicrafts alive. There’s another young girl who makes lace in Slovenia. And she’s worked with other Slovenian lacemakers to provide something remarkable.

Is there a particular piece which stands out in terms of the craft?

DM Yes, I would say there are two pieces which I personally really love. One is that very simple ivory suit (Lagoon suit). That was the first design I had in the collection. We must have done seven or eight trials to get that right. The other piece, which I love is one of the final pieces in the collection, the Tea Coral dress, where you can see all the lines of organza layered up like paper. I often say that the first idea and the last idea you have as a ‘pet’ seem to… come out.

So, in using an old joke, there’s a thread running through all this — beautiful design and the use of authentic craft techniques.

DM Yes, definitely. I want to keep those techniques alive. It’s incredible when you go and meet the people doing it. There is so much soul and so much love put into what they’re doing. Every single person involved in the collection is a master of their art.

The news has been awash with everything to do with sustainability and ecology. You covered it many years ago in Rome but also continued with a much more pressing issue which is to do with the sustainability of the coral reefs.

DM I went to an incredible exhibition on the coral reefs at the Natural History Museum about two years ago. And, first of all, I loved all the dead coral, but then I turned the corner and saw a tank of living coral. I couldn’t believe it. It was like being on another planet. So that was really inspiring from a creative point of view. Then, the next year, with this in the back of my mind, I just happened to read something on the BBC about 80% die-off of coral population. That was horrific. I’d been wanting to do something about the Amazon, but the ocean seemed more pressing. And at the same time, I was introduced to Celine Cousteau, the granddaughter of Jacques Cousteau. We got on very well and decided we’d like to collaborate. So, it all fitted together, and she was able to recommend the Mesoamerican Reef Leadership Program (MAR-L), to which we are donating 10% of our sales. It’s a programme training young people to protect the reef.

It seems like your team is very committed to your cause.

DM Yes, they are. It gives the team a bit more than just making clothes. Although that is also a huge thing for billions of people worldwide — making clothes. We all need to wear them. 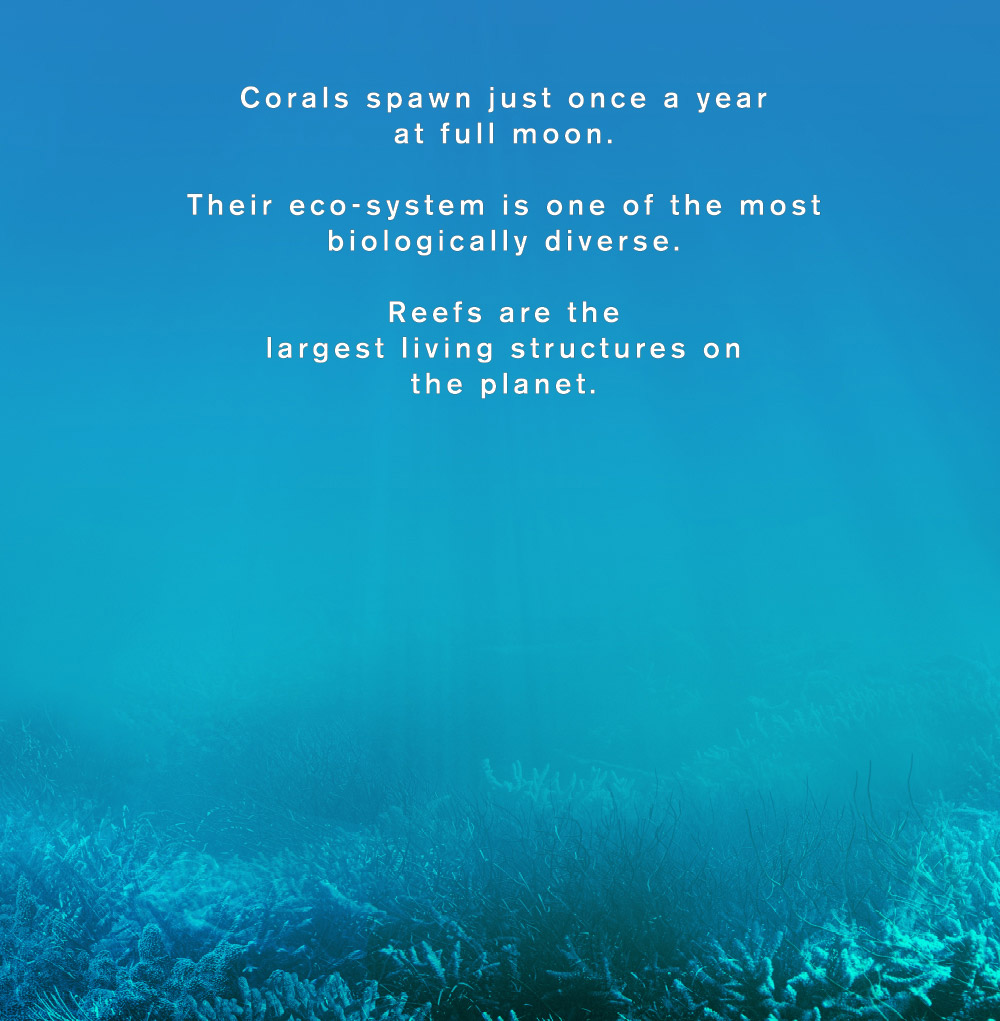 One of several floor-to-ceiling wall panels we designed to re-skin the ante-room that acted as an entrance to the main show space.